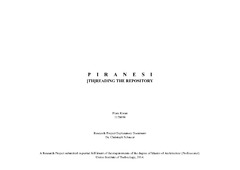 Kwan, F. (2014). Piranesi : [th]reading the repository. An unpublished Research Project submitted in partial fulfilment of the requirements of the degree of Master of Architecture (Professional), Unitec Institute of Technology.

Giovanni Battista Piranesi (1720-1778) is remembered as a visionary architect whose creation of the Carceri d’Invenzione (Imaginary Prisons) surpassed the limits of human imagination and which contains a power to constantly renew itself to transcend beyond time. Piranesi’s ideas exist in the psychological and theoretical realm. The challenge he posed to the limits of architectural representation, its conventions, and the space of representation was never resolved. The research re-examines the Carceri in an attempt to generate a contemporary approach to architecture. This research document focuses on the analytical process of generating architectural space. While the Carceri are conceived as visionary architecture that existed solely on paper, there is an underlying complex system of processes and motivations involved. The research aims to develop a system of design, through analysis and the process of discovery, to ensure the perseverance of Piranesi’s ideas. The techniques will be generated through a process of analytical reading, model explorations, and spatial analysis. The new interpretation of architectural space will be represented in the form of a contemporary building. The Carceri are capable of infinite reinterpretations. The possibilities represented cannot be expressed in a single solution. The essence of Piranesi’s architectural space lies in its ongoing, infinite construction. Project site: Corner Symonds Street and Airedale Street.