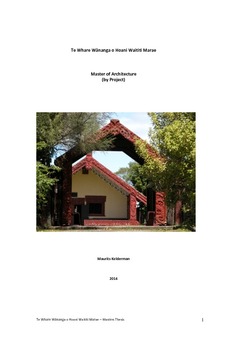 Project The establishment of a whare wānanga at the site of Hoani Waititi Marae, Oratia. The Hoani Waititi Marae has been a centre for Maori educational development since it's opening in 1980. It has hosted such initiatives as marae courts, work skills development schemes, Māon health, Māori language (Ataarangi). Then, with the emergence of kōhanga reo and kura kaupapa Māori, the marae was a leader in pioneering these initiatives. It is also home to the first purpose-built Māori secondary school in Aotearoa and hosts five of the country's most successful Māori cultural performing groups. Te Whare Tū Taua school of Māori weaponry is also based here. The Whare Tū Taua is based very much on the teaching of ancient knowledge albeit with a modern structure to its teaching. [...] The initial concepts were for a 5000 student campus but this has been scaled back and optimistic estimates are for a 3000 maximum student campus. The opportunity to a whare wānanga provides the designer with enormous challenges. Maori educational initiatives such as kōhanga reo and kura kaupapa Māori have succeeded raising the numbers of young Māori language speakers. Māori education at the deep and philosophical level has failed. The erosion and disappearance of the theological and cultural practice held by the tōhunga (sage) and ariki (chiefly lineage in Aotearoa) has seen the loss of not only knowledge but also a system of learning that has evolved in this landscape for over one thousand years. The whare wānanga is the opportunity to create and to a certain extent, recreate another institution that is uniquely different to the ones that currently operate here in Aotearoa. One that place their pedgagoies on more modern, post-colonial models. In contrast this project seeks to capture the essence of the traditional concept of whare wānanga. The only way to do that will be to make a culturally and hopefully fiscally independent instituion that can follow its own course of tino rangatiratanga (self determination). Tribes are now starting to reintroduce the various Whare Wānanga such as the Panekeretanga (Tūhoe Wānanga) and Te Kura i Awaawa in Te Whānau-a-Apanui (eastern Bay of Plenty). The need for authenticity at this point is growing. Te Whare Wānanga o Hoani Waititi: is this solution to creating this independent authentic Māori institution for the 'New Millennium'? Perhaps not, but it will be another model that may expand on the growing demand for a holistic indigenous inspired education.