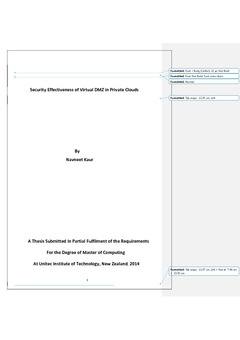 Kaur, N. (2014). Security effectiveness of virtual DMZ in private clouds. An unpublished thesis submitted In partial fulfilment of the requirements for the degree of Master of Computing at Unitec Institute of Technology, New Zealand.

Cloud Computing is being considered as emerging technology in recent times and defines a new IT model that delivers the services over internet. Big IT vendors like Google, Microsoft, Yahoo, Amazon and IBM have their own Cloud Computing approach. It is being widely adopted by IT organisations in the last few years. Since Cloud Computing is an emerging technology it still has some security concerns. Virtualisation is a core technology that makes the Cloud Computing. The adoption of virtualisation is increasing progressively year by year. The major investor of Virtualisation in today’s time is ‘VMware’. Since, it has been used in IT industry for several years for consolidating the servers, therefore many companies are virtualising their IT environment in recent times. Many IT vendors like Citrix, Microsoft and Red Hat have invested capital to make Virtualisation possible to SME organisations. Though Virtualisation benefits the IT organisations but it does not have sufficient security abilities for network as in the case of cloud computing. The security effectiveness of virtual DMZ in private cloud was investigated using the vCloud Director 5.5 and vCenter Server 5.5. Using Vmware ESXi 5.1, a test bed was set up to examine the security of virtual DMZ hosted in Private Cloud. vShield Manager was used as a firewall that monitored the traffic coming to the network. A quantitative approach was used to gather data by using the Vulnerability Assessment tools. Among the DMZ designs, the ‘Fully Collapsed DMZ design’ was chosen to conduct the research experiment. The results obtained by conducting the tests for this research experiment were compared with the results obtained in previous research experiment “Virtualisation and Information Security” (Singh, 2012). By analysing the test results, it was found that hosting the virtual DMZ in Private Cloud has added security to the network. However, the security elements like firewall determine the security level of virtual DMZ. However, the virtual DMZ environments are more secure only if the configuration of virtual DMZs are appropriate.