Breathing life back into the mundane : the adaptive reuse of Dunedin’s industrial heritage 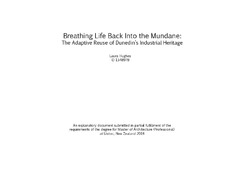 Hughes, L. (2014). Breathing life back into the mundane : the adaptive reuse of Dunedin’s industrial heritage.An unpublished explanatory document submitted in partial fulfillment of the requirements of the degree for Master of Architecture (Professional), at Unitec Institute of Technology.

“...it is again no question of expediency or feeling whether we shall preserve the buildings of past times or not. We have no right whatever to touch them. They are not ours. They belong partly to those who built them, and partly to all the generations of mankind who are to follow us.” – John Ruskin New Zealand’s heritage buildings are at risk as changes to the building code come into force, requiring seismic upgrading of those built before 1976. Unfortunately, many building owners will not see the value in carrying out this necessary work, inevitably opting for demolition or leaving them to decompose among the streetscape. This project seeks to establish the heritage-value of such buildings, those which might be otherwise considered mundane, and will propose an architectural approach to intervene in these situations. The Warehouse Precinct in Dunedin is currently the focus of a revitalisation scheme, but there are many buildings still sitting underutilised and forgotten. Following analysis of the current site context and the proposed development of the area, the design solution aimed to find ways to retain the character of the area and contribute to further revitalisation, now and in the future. Architectural conservation approaches and precedents were explored throughout the course of the research and an appropriate intervention, or series of interventions, was proposed for the site. This accommodated the adaptation of the selected building to suit a new programme, restoring the building’s usefulness to its community. Several design approaches were explored, but the programme developed is a mixed-use creative hub, aimed at encouraging interaction between students and the permanent local population in a creative environment. This was done in line with the city council’s strategy for the area, and expected to further promote the use of other heritage buildings for varied and innovative uses. This project demonstrated ways in which value may be found in underutilised or dilapidated buildings and how these can then be rejuvenated through innovative architectural intervention, reintegrating them into our cities’ built fabric for years to come. It is our responsibility to maintain our heritage buildings and ensure that they remain functioning elements of our streetscapes. Project site: 3 buildings in the Warehouse Precinct of Dunedin: His Majesty's Theatre, Agricultural Hall (Annexe), Brydone Hall.