At the confluence : heritage, landscape and the construction of belonging 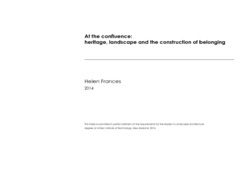 Frances, H. (2014). At the confluence : heritage, landscape and the construction of belonging. An unpublished thesis submitted in partial fulfilment of the requirements for the Master in Landscape Architecture degree at Unitec Institute of Technology, New Zealand.

Landscape architecture has a long history of engagement with heritage. Design practice frequently hones in on the expression of narrative associated with the design site to reflect, or promote, a sense of place. However, heritage is a cultural construct, a version of the past created by people to serve their needs in the present. Because it is invented by people it is always contestable; what is significant and valued by one group of people will not be so by others. Additionally, in relation to landscape there is a tendency to think only of built forms, material objects, historical narratives associated with place and scenic qualities as heritage concerns. Intangible heritage such as traditional practices, activities, art and story may be more important than material heritage for some people. This project uses the design of a riverside walkway in a small rural community with a very strong heritage story to test an engagement with heritage in the landscape that incorporates the political and intangible dimensions as revealed as significant by the community. The project uses four main streams of research to inform an iterative design process: interviews and focus groups to uncover the politics of heritage on this site, and explore the meanings and value of different kinds of heritage to the community ; an examination of rivers, the unique qualities of the rivers in the design site, and their meaning to the local community ; an examination of theories of landscape that provide a framework for representing intangible heritage; and an analysis of design precedents that reveal design principles for walkways and the dynamics of politics in contested sites. From these converging streams of research a design approach for the walkway is proposed that firstly places landscape architecture within the social-cultural political frame that generates heritage, and thus makes design part of a process that reinvents heritage, rather than simply reflecting it. Secondly, based on occupation of the site and activities within it, time and process are proposed as organising principles for representing heritage, rather than traditional methods of interpretation such as storyboards. Third, utilising design principles that emerged from the analysis of precedents, and a focus on process and community engagement, the design seeks to make a material space that attracts people to use it and works as an amenity for this community. Patuharakeke are a composite hapu descended from most major iwi groups in the north, including Ngati Wai, Ngapuhi nui tonu and Ngati Whatua, and affiliates to a very large number of hapu. Located on the south side of Whangārei Harbour, the Patuharakeke rohe stretches on the seaward side, including foreshore and seabed, from Mangawhai Heads in the south to the entrance of the Mangapai River, just south of Whangarei. The boundary extends inland to include the Brynderwyn, or Piroa, ranges, the hill blocks surrounding Waipu and the Kakanui Ranges further west (Patuharakeke Te Iwi Trust Board (Inc), 2007). In their statement of evidence to the Waitangi Tribunal Patuharakeke identify over fifty sites of significance in or around their rohe. Notable in relation to this project are the Waipu caves in the Pohuenui Fault Block, the Waihoihoi River that runs through Waipu, Uretiti beach and the whole of the Wangari (Bream) Bay coastal area known as Te Akau. In addition there are twenty-four recorded defensive pa in and around Waipu. Site: Waihoihoi River near the town of Waipu, Northland.