The reframed portrait : redefining the roles of the artist and sitter within the genre of portraiture 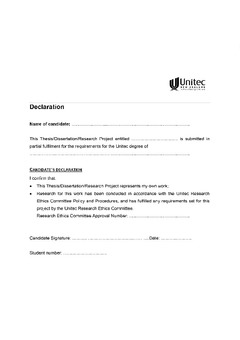 Lomiwes, C. (2013) The reframed portrait : redefining the roles of the artist and sitter within the genre of portraiture. [An unpublished thesis submitted in partial fulfilment for the requirements for the Unitec degree of Master in Design].

This research project investigates the role of 'agency' within the conventional terms of reference when it pertains to the artist and the model in the genre of Portraiture. The project investigates the expectations within the roles of models and artist in an attempt to discover new methods of creating portraits. The project is divided into two phases. The first phase followed a conventional painterly approach in developing portraits through traditional materials. The second phase was a response to the issues uncovered during the former. After critically scrutinizing canvasses produced during the first phase, it was determined that these works did not accurately answer the aim of the project. With this insight, changes were made to the methodologies, theoretical context and medium of the project to align it closer to the appropriate area of investigation. This meant that the conventional materials and methods utilized during the first phase were re-examined to accommodate the new digital format that the project embodied. A software program that digitally painted the model was created at the end of the project. This software produced unbiased images by avoiding the hierarchical framework usually implemented in the creation of conventional portrait paintings. By physically removing the presence of the artist, the model is given agency to present themselves in a manner that personifies their true nature. The project improves on the contextual landscape of Portraiture by offering an alternative method that considers the model as the dominant role instead of the artist. This process produces a more genuine portrayal of the model as they initiate how they wished to be perceived through paint. Also, the quick capture and process of raw video data into digital paintings by the software allows for a more candid and therefore honest interpretation of the model.