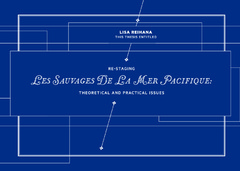 Reihana, L. (2012). Re-staging Les Sauvages de la mer Pacifique : theoretical and practical issues. An unpublished thesis submitted in partial fulfillment of the requirements for the degree of Master by Design.

This writing can be broadly characterised as presented in two parts: WAYFARING discusses the inspiration for a new work, and outlines some theoretical issues and cultural approaches. VOYAGING examines the ‘making’, which includes technical research, the organisation and experimentation required to produce a complex video project. I found it useful to adopt a diaristic writing style incorporating Old English terminology, and this is in reference to Captain Cook’s journal entries. I slip between the uses of pronouns ‘I’, ‘we’ and ‘us’. In general the use of ‘I’ relates to me as the Artist/Concept Developer; the use of ‘we’ and ‘us’ may indicate collective discussions between myself, the crew and/or performers. Although the video will be prominently credited with my name, the use of ‘we’ and ‘us’ is important as it reflects my wish for people associated with this work to have a sense of ownership too. The thesis uses APA referencing. The basis for my artwork is the celebrated 19th Century French scenic wallpaper Les Sauvages de la mer Pacifique (1804-05) that depicts Captain Cook and Louis de Bougainville’s Pacific discoveries using journal accounts and popular illustrations of the time. Whilst claiming to be historical, it aimed to be entertaining rather than informative and challenging; the Maori, Pacific and First Nations peoples featured in the wallpaper have been removed from their cultural, political and historical reality. However, the inclusion of Captain Cook at the infamous moment of his death in Hawaii is THE site of rupture, and provides inspiration to reappraise this pictorial fantasy using synchronised multi-screen video. The risks of encounter and the cultural conflicts between the explorers and Pacific peoples are given new voice by offering indigenous people opportunities to resist stereotypes, answer back, and embody their own agency. As is common to many arts practitioners, my work employs a heuristic methodology, one where the act of making is a process of experimentation leading to new knowledge. I have a significant practice to draw upon, and so I discuss previous works that have engaged with colonial imagery of indigenous people as these offer practical approaches, and assisted me in undertaking this complex project. I outline a four-stage production process designed to enable the making of the panoramic video in Pursuit of Venus. The first two stages including formulating a technical production plan, and capturing the lush idyllic Pacific imagery fundamental to the final work are now complete. In Pursuit of Venus emulates the modular nature of Les Sauvages de la mer Pacifique in that it contracts or expands to fit any size room. I end with a brief description of in Pursuit of Venus first screening at the Mt. Albert estate Alberton House. ***************************************************************************************************** New Zealand - Lisa Reihana - Emissaries (In Pursuit of Venus [infected]) - Venice Biennale 2017 - Feb 15, 2019 https://youtu.be/TEZQ-O4vihY