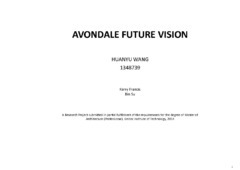 Wang, H. (2014). Avondale future vision. An upublished research project submitted in partial fulfillment of the requirements for the degree of Master of Architecture (Professional). Unitec Institute of Technology.

Auckland is developing fast, and the population will be much denser than now in the next 20 to 30 years. Because of the development, Auckland needs more dwellings. But usually, Aucklanders prefer individual houses for better living quality. That preference brings a problem when meeting the growing population: Auckland needs a large amount of land to have more residents, and makes the city over expanded. That expansion has already increased the travel time lowered the circulation efficiency of Auckland. Avondale was chosen as the sample area for the study because Avondale represents the general situation of the expansion of Auckland. This thesis will explore possible ways of solving the conflict between people’s ambitions for living quality and the limited land for the increasing population in Avondale. This thesis first collected and analyzed some background information of the current situation in Avondale to find out the key issues (gardening and food) and constructed the main problem (living density vs. living quality). Then, based on these issues, literature materials and design precedents that aim to respond to similar issues or in similar situations were studied to generate the starting ideas and concepts for the later design stages. The design stages then explored different possibilities in order to respond to the key issues at every scale (from a single dwelling to the entire site) on a particular site in Avondale. The result is a residential development design in response to the key issues and problems. Project site: Avondale Racecourse (Avondale Sunday Market) - Ash Street boundary.