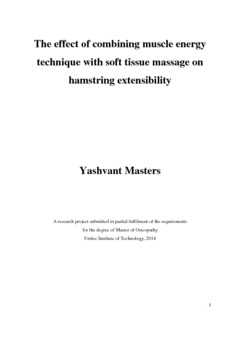 Masters, Y. (2014). The effect of combining muscle energy technique with soft tissue massage on hamstring extensibility. An unpublished research project submitted in partial fulfilment of the requirements for the degree of Master of Osteopathy, Unitec Institute of Technology.

INTRODUCTION The implications of reduced muscle extensibility are exemplified by the hamstrings and its effects of lower limb and lumbar mechanics. Reduced hamstring extensibility is often seen in conditions such as patellofemoral disorders, plantar fasciitis, and lower back pain. Osteopaths often use specific stretch techniques that essentially comprise of muscle energy and soft tissue massage to improve muscle extensibility and joint range of motion (ROM). Although commonly applied together, evidence to support the effectiveness of muscle energy technique (MET) combined with a specific cross-fibre soft tissue technique to increase knee joint ROM is scarce. OBJECTIVE The aim of this study was to investigate the combined effects of an isometric contraction MET with a soft tissue cross-fibre technique on active knee extension (AKE) and passive knee extension (PKE). DESIGN Repeated measures cross-over design. METHODS 20 asymptomatic participants (aged 18-45) with a PKE angle of 20 degrees or more were pseudo-randomised to two counterbalanced groups. Group 1 (n=10) received MET and cross-fibre soft tissue and 7 days later received MET only. The same treatments in reverse order were performed on Group 2 (n=10). Measurements for AKE, PKE and passive elastic force were recorded pre and post-intervention. RESULTS A three-way mixed-method multivariate analysis of variance (MANOVA) revealed a significant overall effect of time indicating that all measures improved following the interventions, regardless of the intervention. Greater improvements were seen in PKE (p=0.041) and passive force (p=0.005) with MET combined with soft tissue treatment, than with MET alone in both groups. No significant intervention effect for the AKE measure was observed (p=0.55). CONCLUSION This study demonstrated that adding cross-fibre soft tissue massage to MET improves passive knee ROM more than MET alone, due to an increase in stretch tolerance as measured by changes in passive force. However, both interventions failed to show any significant improvements in AKE.