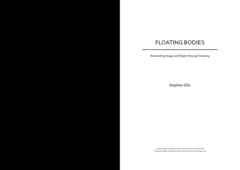 Ellis, S. (2014). Floating bodies : reconciling image and object through drawing. An unpublished research project submitted in partial fulfilment of the requirements for the degree of Master of Design by Project.

This exegesis plots the course of the Floating Bodies project and its ambition to examine climate change iconography through a reconciliation of Image and Object. From an initial polarity, in both concept and outcome, between pictorial and sculptural elements of a single work of art, the project pivoted to consider non-physical ways of combining or converging the two- and three-dimensional. Interrogations of the work and praxes of Vilja Celmins and Anton Henning sparked a broader apprehension of the reconciliation, corroborated by reading of curators Sabine Eckmann and Gertrud Koch on poststructural space, its representation and framing. A synthesis of Image and Object could be found in Image OF Object beyond the conventions and limitations of still life. The project consequently turned to drawing to re-present and re-frame repaired objects montaged with weather and sea imagery. A pendant interrogation of the Sublime and European Romantic land- and sea-scape in parallel with a preference for the contemplative and the visionary led to the making of large obsessively crafted images of repaired domestica threatened by colossal seas. Drawing has long been a part of this practice, but had become devalued through overuse; the rediscovery of the power of the massed mark and the satisfactions of the protracted deliberate accretion of an image are the two signal revelations of the Floating Bodies project. An early political and aesthetic commitment to a humble materiality means that the Floating Bodies suite of drawings that concludes the project are rendered in ballpoint pen on paper, transient media that reflect the environmental preoccupations of the project.