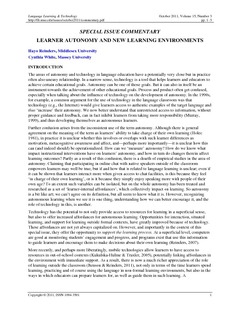 The areas of autonomy and technology in language education have a potentially very close but in practice often also uneasy relationship. In a narrow sense, technology is a tool that helps learners and educators to achieve certain educational goals. Autonomy can be one of those goals. But it can also in itself be an instrument towards the achievement of other educational goals. Process and product often get confused, especially when talking about the influence of technology on the development of autonomy. In the 1990s, for example, a common argument for the use of technology in the language classroom was that technology (e.g., the Internet) would give learners access to authentic examples of the target language and thus ‘increase’ their autonomy. We now better understand that unrestricted access to information, without proper guidance and feedback, can in fact inhibit learners from taking more responsibility (Murray, 1999), and thus developing themselves as autonomous learners. Further confusion arises from the inconsistent use of the term autonomy. Although there is general agreement on the meaning of the term as learners’ ability to take charge of their own learning (Holec 1981), in practice it is unclear whether this involves or overlaps with such learner differences as motivation, metacognitive awareness and affect, and—perhaps more importantly—it is unclear how this can (and indeed should) be operationalized. How can we ‘measure’ autonomy? How do we know what impact instructional interventions have on learners’ autonomy, and how in turn do changes therein affect learning outcomes? Partly as a result of this confusion, there is a dearth of empirical studies in the area of autonomy. Claiming that participating in online chat with native speakers outside of the classroom empowers learners may well be true, but if and how that is related to language learning is unclear; even if it can be shown that learners interact more when given access to chat facilities, is this because they feel ‘in charge of their own learning’, or is it because they simply enjoy speaking more with people of their own age? To an extent such variables can be isolated, but on the whole autonomy has been treated and researched as a set of ‘learner-internal affordances’, which collectively impact on learning. So autonomy is a bit like art; we can’t agree on its definition, but all seem to know what it is. However, recognizing autonomous learning when we see it is one thing, understanding how we can better encourage it, and the role of technology in this, is another