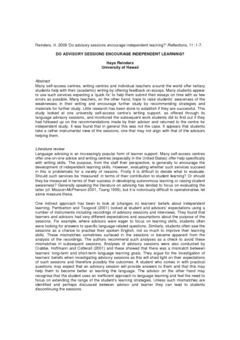 Reinders, H. (2008) Do advisory sessions encourage independent learning? Reflections, 11: 1-7. NOTE: This is research undertaken for the University of Hawaii prior to the author being affiliated with the Unitec Institute of Technology.

Many self-access centres, writing centres and individual teachers around the world offer tertiary students help with their (academic) writing by offering feedback on essays. Many students appear to use such services expecting a 'quick fix' to help them submit their essays on time with as few errors as possible. Many teachers, on the other hand, hope to raise students' awareness of the weaknesses in their writing and encourage further study by recommending strategies and materials for further study. Little research has been done to establish if they are successful. This study looked at one university self-access centre's writing support, as offered through its language advisory sessions, and monitored the subsequent work students did to find out if they had followed up on the recommendations made by their advisor and returned to the centre for independent study. It was found that in general this was not the case. It appears that students take a rather instrumental view of the sessions, one that may not align with that of the advisors helping them. Literature review Language advising is an increasingly popular form of learner support. Many self-access centres offer one-on-one advice and writing centres (especially in the United States) offer help specifically with writing skills. The purpose, from the staff their perspective, is generally to encourage the development of independent learning skills. However, evaluating whether such services succeed in this is problematic for a variety of reasons. Firstly it is difficult to decide what to evaluate. Should such services be 'measured' in terms of their contribution to student learning? Or should they be measured in terms of their success in developing autonomous learning or raising student awareness? Generally speaking the literature on advising has tended to focus on evaluating the latter (cf. Mozzon-McPherson 2001, Tsang 1999), but it is notoriously difficult to operationalise, let alone measure these. One indirect approach has been to look at (changes in) learners' beliefs about independent learning. Pemberton and Toogood (2001) looked at student and advisors' expectations using a number of instruments including recordings of advisory sessions and interviews. They found that learners and advisors had very different expectations and assumptions about the purpose of the sessions. For example, where advisors were eager to focus on learning skills, students often were looking for answers to specific language-related questions. Similarly, students often saw the sessions as a chance to practise their spoken English, not so much to improve their learning skills. These mismatches sometimes surfaced in the sessions or became apparent from the analysis of the recordings. The authors recommend such analyses as a check to avoid these mismatches in subsequent sessions. Analyses of advisory sessions were also conducted by Crabbe, Hoffmann and Cotterall (2001) and these showed that there was a mismatch between learners' long-term and short-term language learning goals. They argue for the investigation of learners' beliefs when investigating advisory sessions as this will shed light on their expectations of such sessions and therefore possibly the outcomes. A student who comes in with practical questions may expect that an advisory session will provide answers to them and that this may help them to become better at learning the language. The advisor on the other hand may recognise that the student uses an inefficient approach to language learning and feel the need to focus on extending the range of the student's learning strategies. Unless such mismatches are identified and perhaps discussed between advisor and learner they can lead to students discontinuing the sessions.