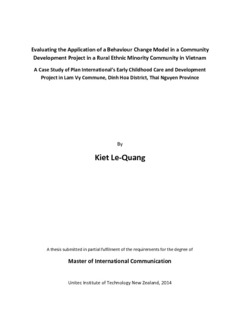 Le-Quang, K. (2014). Evaluating the application of a behaviour change model in a community development project in a rural ethnic minority community in Vietnam : a case study of Plan International’s Early Childhood Care And Development Project in Lam Vy Commune, Dinh Hoa District, Thai Nguyen Province. An unpublished thesis in partial fulfilment of the requirements for the degree of Master of International Communication.

This research focuses on the application of development communication in rural ethnic minority community development in Vietnam. The main research question focused on “How effective is the implementation of a community development project that applies a behaviour change model in a rural ethnic minority community in Vietnam?”. A related case study from the ongoing Early Childhood Care and Development (ECCD) project of Plan International in Vietnam in Lam Vy commune (Dinh Hoa rural district, Thai Nguyen province) provided the context of the research, in which there were 26 informants during the period of one month, from late September 2013 to late October 2013. Non-participant observations, along with in-depth interviews and focus groups were the main data collection methods that sought to identify the researched community’s behaviour change in parenting skills and practices. Communicative ecology mapping, in addition, assisted the researcher in understanding more about the community and its people via exploration of the channels of communication that have impacted their daily activities. The research aims to evaluate how effective the project has been in implementing participatory approaches and the behavioural model, in improving parents’ knowledge of holistic child care and development. Effectiveness, in this research, is measured through both expected outcomes of Plan in Vietnam and perceptions of parents/community about the project, their needs, and their behavioural change. The low participation level of the participants, the absence of fathers from the parenting groups, and the lack of utilisation of the media are presented as the key findings of this research. It is recommended that the participation level of the participants needs to be increased by giving the parents more opportunities, not only to contribute to, but also define for themselves the operation of the parenting groups. It is also recommended that the organisation considers the use of media as a tool in engaging people in the project and increasing participation levels. Evidence from this research indicates that the integration of top-down policies and projects and bottom-up approaches with the participation of marginalised people could benefit the development process in ethnic minority communities in Vietnam.