Identity construction online : the use of Facebook by the Uyghur diaspora 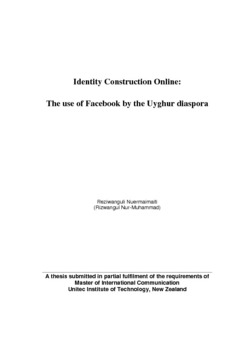 Nuermaimaiti, R. (2014). Identity construction online : the use of Facebook by the Uyghur diaspora. An unpublished thesis submitted in partial fulfilment of the requirements of Master of International Communication Unitec Institute of Technology, New Zealand.

Identity construction of diaspora people has been facilitated through the use of the Internet, particularly, social network sites (SNSs), providing online spaces for transnational communication. Diaspora identity construction of the Uyghur2 diaspora on SNSs has not been explored, or at least has not yet been documented. This thesis presents empirical findings of a research examining the use of Facebook, as one example of SNSs, among the Uyghur diaspora with a focus on diaspora identity construction. It is guided by the research question, how the Uyghur diaspora identity is being constructed on Facebook. It provides a preliminary and exploratory analysis of how Facebook is serving as a platform for transnational Uyghur diaspora, how the Uyghur diaspora identity is negotiated through everyday Facebook use, and in turn, how the expression of identity online is contributing to the production of and emerging Uyghur diaspora identity. The research applied a two-stage content analysis of messages uploaded on the Uyghur diaspora Facebook sites during January to April, 2013. In the first stage, data were collected from Facebook profiles and were analysed quantitatively to provide a general overview of how Facebook is used among the Uyghur diaspora. Results from this stage also helped the selection of Facebook sites for a further qualitative analysis in the second stage, in which data were collected from discussion archives of selected Facebook sites and were analysed qualitatively to provide an understanding of how the Uyghur diaspora identity is being constructed online. Research findings indicate that the Uyghur diaspora identity online is actively being explored and constructed through everyday communication on Facebook. Findings suggest that this identity is defined by continuing connections to the original homeland and it is multidimensional encompassing ethnic, cultural, national, religious, and political identity. While ethnic, cultural, and national identity are being cohesively articulated, political and religious identity is negotiated with inclusion of differences and fragmentations. Nevertheless, with a common feeling of discontent towards Chinese regime and close concerns about situations of the Uyghurs in homeland, the globally dispersed Uyghur diaspora is still emerging as a collective subject. Findings demonstrate that the diaspora Uyghurs on Facebook express a strong awareness of social network sites as a useful tool for identity exploration and construction, transnational connection and communication. However, it appears that concerns over Chinese state surveillance might be a serious limitation to Facebook as a platform which encourages a stronger participation. This thesis contributes to research on how diaspora use the Internet to construct a shared imagination of identities and original homeland. It provides a foundation for future multi- and interdisciplinary studies as well as comparative and longitudinal studies on Uyghur diaspora. It points to the need for further research to address the complexity of the Uyghur diaspora identity in its interplay with other major factors for unifying the Uyghur diaspora. 1 Reziwanguli Nuermaimaiti is the candidate’s official name. However, Rizwangul Nur-Muhammad is the version of her name the candidate prefers as it is closer to the original spelling and allows for the correct pronunciation. 2 The ethnic name for Uyghur people is spelled in various ways, including Uyghur, Uighur, Uygur, and Uigur. In this thesis, the chosen version is Uyghur.