An evaluation of a New Zealand safe@home service : using a crime prevention approach to enhance the safety and overall well-being for high risk victims of domestic violence 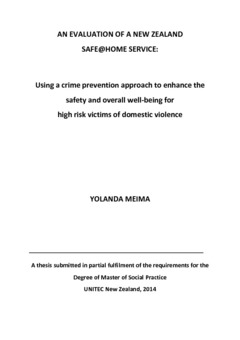 Meima, Y. (2014). An evaluation of a New Zealand safe@home service : using a crime prevention approach to enhance the safety and overall well-being for high risk victims of domestic violence. An unpublished thesis submitted in partial fulfilment of the requirements for the Degree of Master of Social Practice, UNITEC New Zealand.

Numerous women have left their homes in their attempt to stop the violence used against them by their partner and potentially saving their lives. Mothers often move into a safe place, taking their offspring with them. Despite the leavers being the victims or the ones who are wrongly harmed, leaving their homes often goes unchallenged and indeed, encouraged by others. Safe at home models work on the premise that victims of domestic violence should have the right to choose whether they want to remain in their homes, be able to do this safely and have the support of community and government organisations. Such models are informed by Routine Activity Theory (RAT), a crime prevention approach, vary in design and have been implemented and operating over recent decades in the United Kingdom (UK) and Australia. The safe@home service evaluated in this research is unique to New Zealand and has been provided since late 2008 by Safer Homes in New Zealand Everyday (Shine), a non-government agency that works to reduce domestic abuse. The study has two parts that include qualitative data and quantitative analysis. This project involved a review of over 100 pre and post-service questionnaires that clients of Shine’s safe@home service completed prior to the service and within 1 – 3 months following the service, and interviews with 10 of these clients at least 12 months after the service. Sixty four clients’ self-assessed pre and post-service questionnaires were fully completed and analysed, showing that 97% of these clients had substantial reductions in their level of fear; with equivalent improvements in their quality of life and whom reported major changes in many aspects of their lives. The data was then ranked and grouped according to those least and most satisfied with the service. Five clients from each group were the research participants and interviewed. Thematic analysis was used to identify, analyse and report on patterns or themes within the data collected from these in-depth semi-structured interviews. The interview data found that contrary to concerns in the literature regarding the safety for women who remain in their homes, the women and children in this study were able to continue to live free from violence in their homes. The interviews included the participants rating of their and their children’s level of fear of their ex-partner experienced prior to the service and currently. Again there were huge reductions from pre-service levels, with the reduction continuing over the period from post-service levels right up to the time of the interview. Despite some on-going abuse by their former partners, previously successful attempts to break into their homes now proved fruitless. Other topics covered in this research study include their current quality of life and well-being, relationships with others, study and work, social activities and their future aspirations. A discussion about the role of counselling for the participants and their children is provided along with the influence of discourses as identified by the participants. Recommendations on how the Shine’s safe@home service can be improved is based on the suggestions made by the participants and the research findings.