Lignification : the demise and rise of a seed warehouse 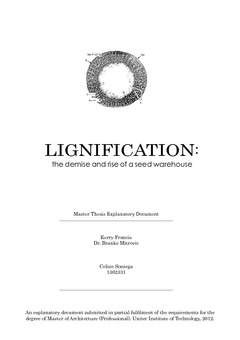 Soniega, C. (2012). Lignification : the demise and rise of a seed warehouse. Master thesis explanatory document. An unpublished explanatory document submitted in partial fulfilment of the requirements for the degree of Master of Architecture (Professional), Unitec Institute of Technology.

Change is a fast-paced revolution. City blocks and buildings are transformed over a short period of with often no residue. The short transformation period shortens the transition between the past to the present without any evidence of the passage of time. The history of the site, its past life and decay has been disguised. Whilst it is common to create new buildings and modern architecture, it is also important to acknowledge the past of a site or building and to express the different layers of architecture as they capture the state of the society at the time of their creation, each layer representing a different problem and solution. Another product of this rapid revolution is the creation of the terrain vague, or spaces that have been disconnected from the framework of the city. These are often results of people moving their businesses and functional spaces to newer areas within the city creating unbounded spaces that are decayed and reclaimed by nature over time. There is a duality in the character of the terrain vague, these forgotten areas allow an alternative society to flourish. They become spaces where people can perform activities that would otherwise be unacceptable. These areas represent freedom from modern society. The main focus of this research project is to reactivate a subcategory of the terrain vague; abandoned buildings that have been left to decay over years of disuse. Weave these spaces back into the urban fabric without compromising it’s character. The expression of the different layers of architecture over time and to acknowledge the past, present and the future by embracing decay and ruination as opposed to a restorative approach. The architecture allows an overlap of the old and the new allowing it’s users to experience the changing terrain at a humanistic scale through the process of decay and the lignification of a new structure. The analysis was done against the definition of terrain vague as a place that is obsolete by choice of its owners and occupants as it is no longer in the ‘ideal’ condition or aesthetic, is dysfunctional as a building as its original function is no longer relevant, and therefore the functional design prevents the building from being adapted to another use. SITE: Yates Building, on Albert Street which runs parallel to Queen Street, Auckland CBD’s main commercial road. There are actually three buildings on the site:The Yates Building (part of which is known as Challenge House), the Food Alley building and Link House. Redevelopment as a Seed Bank.