Taonga – not dead fish! : how can the ethos of Māori taonga be presented in the marketplace of New Zealand / Aotearoa small-scale fisheries? 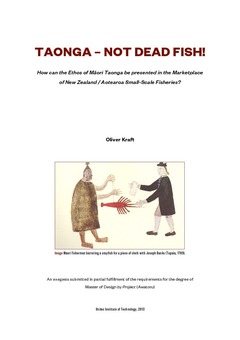 Kraft, O. (2013). Taonga – not dead fish! : how can the ethos of Māori taonga be presented in the marketplace of New Zealand / Aotearoa small-scale fisheries? An unpublished exegesis submitted in partial fulfillment of the requirements for the degree of Master of Design by Project (Awatoru). Unitec Institute of Technology.

Artisanal fisheries from the Seychelles – an isolated archipelago in the Indian Ocean, some 1500 kilometers east of mainland Africa, label each fish with a unique code and an Internet address. This enables chefs, retailers and consumers to find out who caught the fish, and also how and where it was caught. Furthermore, they learn that an independent organisation frequently verifies that the fishing techniques utilised do in fact mitigate damage to the fragile marine ecosystem (Lagarde & Pommeret, 2010). The Seychelles ecolabel provides a reliable opportunity for consumers to support good practice, and the traceability establishes a link to the fishermen. Furthermore, compared to the market value of identical fish without labelling, the labeled fish achieve higher prices of up to 25%. The Taonga – not dead fish project started out with the idea that a similar scheme, redesigned for local circumstances, could work for Aotearoa small-scale fisheries. In order to achieve reasonable depth, the research scope was narrowed down to the Rock Lobster industry, keeping in mind that learnt principles should be applicable to other industries. This choice wasn’t random. Working towards healthy Rock Lobster populations is important, because the species is pivotal for the ecosystem it inhabits (Bruce & MacDiarmid, 2012). Other considerations concerned the manageable scale of the fishery (small boats, small crew), and the fact that the Rock Lobster trade has significant cultural and commercial value. Before the research could center on how such a labelling scheme could operate in New Zealand, however, there was an important question that needed to be addressed: what exactly is it that fisheries with Māori affiliation would want to share with the market? Haare Williams, a native te reo speaker, poet and artist, pointed out a promising trail when he explained the term tikanga to me. Tikanga, he explained, stems from tika – te reo for “right” or “correct,” so tikanga literally means “doing what is right” (H. Williams, kōrero, September 25, 2011). Tikanga Māori, according to Hirini Mead, is commonly used to describe the way(s) things are done according to Māori customs, profoundly reaching into all aspects of life. The concepts underlying tikanga derive from mātauranga 9 Māori (Mead, 2003). In the context of fishing, tikanga often reflect the ideal of kaitiakitanga – a complex system Māori have developed over time to keep a balance between themselves and their environment (New Zealand. Waitangi Tribunal, 2011). Kaitiakitanga more often than not consolidates seemingly pragmatic conservational methods – such as rāhui, with spiritual concepts – such as karakia and tapu (New Zealand. Waitangi Tribunal, 2011). Chapter one and three interpret and contextualize those and other mātauranga derived principles in more depth, and discuss their significance in contemporary application. The initial consultation with Haare Williams sparked the idea of certifying commercial fisheries for applying cultural practices that relate to kaitiakitanga in their daily operation. The plan seemed reconfirmed by literature discussing the interdependency of cultures and their environments (for example by Diamond, 2005; Pilgrim & Pretty, 2010). The project had found its focal point: the design of an ecolabel integrating cultural practices. Following the guidelines for ecolabelling published by the Food and Agriculture Organization (FAO), compliance of fisheries with ‘standards’ (which would need to be developed with stakeholders) was going to be verified by an independent, accredited certification body (FAO, 2009). But if tikanga is the context, which standards, or whose standards would candidate fisheries need to comply with? Tikanga is regionally different – even from one bay to another (Mead, 2005; H. Williams, kōrero, September 25, 2011). Biocultural diversity conservation, a relatively young field of research manifested by Maffi and Woodley (2010), considers regional differences in cultural practices as important diversity of place-specific TEK (traditional ecological knowledge), that is inextricably interwoven and interdependent with the diversity of the natural environment. Regardless of whether this correlation is examined from a local or a global perspective, it gives a whole new understanding to UNESCO’s visionary declaration (2001), that cultural diversity “as a source of exchange, innovation and creativity is as necessary for humankind as biodiversity is for nature” (Article 1). Seen from that perspective, local differences are one of tikanga’s very valuable qualities. By contrast, a linear certification system that regards differences as difficulties might contradict, possibly even corrupt, the diversity of tikanga. In any event, a process solely based on ‘western’ methods might be counterproductive and unlikely to find much support from Māori fisheries. Clearly, the initial concept of ‘verifying cultural standards’ needed more thinking and exploration. The focus of the research consequently shifted on creating a scheme that, while being guided by ecolabelling, would follow cultural protocol and integrate the diversity of tikanga. It needed a fresh approach, one that aligns certification criteria and processes better with Māori culture and the ideas of biocultural diversity conservation