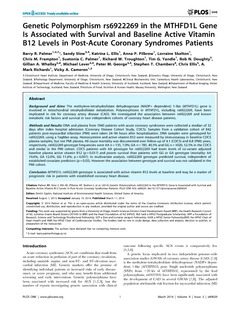 Background and Aims: The methylene-tetrahydrofolate dehydrogenase (NADP+ dependent) 1-like (MTHFD1L) gene is involved in mitochondrial tetrahydrofolate metabolism. Polymorphisms in MTHFD1L, including rs6922269, have been implicated in risk for coronary artery disease (CAD). We investigated the association between rs6922269 and known metabolic risk factors and survival in two independent cohorts of coronary heart disease patients. Methods and Results: DNA and plasma from 1940 patients with acute coronary syndromes were collected a median of 32 days after index hospital admission (Coronary Disease Cohort Study, CDCS). Samples from a validation cohort of 842 patients post-myocardial infarction (PMI) were taken 24–96 hours after hospitalization. DNA samples were genotyped for rs6922269, using a TaqMan assay. Homocysteine and active vitamin B12 were measured by immunoassay in baseline CDCS plasma samples, but not PMI plasma. All cause mortality was documented over follow-up of 4.1 (CDCS) and 8.8 (PMI) years, respectively. rs6922269 genotype frequencies were AA n = 135, 7.0%; GA n = 785, 40.5% and GG n = 1020, 52.5% in the CDCS and similar in the PMI cohort. CDCS patients with AA genotype for rs6922269 had lower levels of co-variate adjusted baseline plasma active vitamin B12 (p = 0.017) and poorer survival than patients with GG or GA genotype (mortality: AA 19.6%, GA 12.0%, GG 11.6%; p = 0.007). In multivariate analysis, rs6922269 genotype predicted survival, independent of established covariate predictors (p = 0.03). However the association between genotype and survival was not validated in the PMI cohort. Conclusion: MTHFD1L rs6922269 genotype is associated with active vitamin B12 levels at baseline and may be a marker of prognostic risk in patients with established coronary heart disease.

2014 Palmer et al. This is an open-access article distributed under the terms of the Creative Commons Attribution License, which permits unrestricted use, distribution, and reproduction in any medium, provided the original author and source are credited.