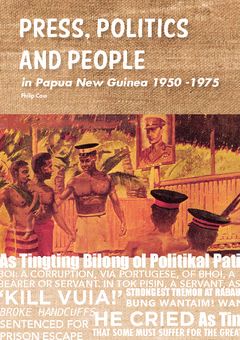 [PNG] newspapers show an expatriate population expressing attitudes that were often at variance with official policy and out of sympathy with the needs of the indigenous population. It sometimes shows us what the indigenous population thought and did, but just as often their omission from the pages of the daily or weekly press leaves us to draw our own conclusions. From this we can trace an outline, at least of the changing relationship between the sinabada and the haus meri and the taubada and the haus boi. (The fact that an expatriate couple might be addressed as sinabada and taubada in Papua, but as masta and missis in New Guinea did not change the fact that the meri and haus boi remained just that.) Relationships between expatriates and indigenes did change in the period covered by this book; indeed a seismic shift in power, in attitudes and in relationships between expatriate and indigenous people occurred during these two decades. This book draws on the commercial and church press - and, to a certain extent, official and mission publications - to draw a picture of how those changes occurred and what they meant to the country. The press can be a valuable source for historians, not just as a first draft of history, but as a means of understanding the day to day lives of citizens and their concerns. This is particularly true when a newspaper serves a small community. Stuart’s history of Port Moresby, for instance, is all the better because he uses the Papuan Courier to show what the expatriate community was doing and thinking. In the current narrative the Rabaul Times will serve as just such a mirror of a small expatriate population. The press also provides valuable insights into particular episodes and processes as well as broad historical periods. The Post-Courier provides an example of a paper which reported on local stories that often had national significance in a time of unprecedented social and political change in the Territory. Wantok provides us, across a five year period, the application of the media to promote health, education, human development and national identity.

Press, Politics and People in Papua New Guinea 1950-1975 by Philip Cass is licensed under a Creative Commons Attribution-NonCommercial 4.0 International License.