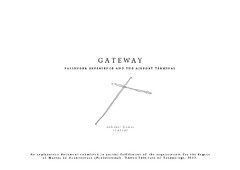 Kumar, A. (2013). Gateway : passenger experience and the airport terminal. Unpublished explanatory document submitted in partial fulfillment of the requirements for the degree of Master of Architecture (Professional).

Today, the design of airports - and their success - is conventionally measured by its efficiency; by its ability to manage the arrival and departure of planes on time for the minimum of passenger effort. Airports such as London Heathrow - the “gateway” into the UK - has seen extensive renovation over its years to facilitate the growing demand of air travel, where the passenger spends most of the time battling the queues. The focus of this research project is the design of an airport terminal which invokes “gateway”, as a way of reflecting a nation’s unique identity. The selected context for this project is Fiji Islands, a holiday destination sought by many across the globe for its unique culture, climate and tourism attractions. The project begins by investigating the historical context of travel, highlighting interesting facts, discoveries and achievements made through the evolution of transport, such as the emergence of the Stagecoach era in the 18th century, to the first international flight from London to Paris in 1919. The focus is then shifted towards the architecture of early airport terminals precedents, from the expressionism of Eero Saarinen’s TWA Terminal in 1962, to the celebration of regional characteristics in Norman Foster’s Beijing Airport, begun 2003. The study of precedents are of particular significance to the topic of this research, ultimately informing strategies for design. The intention is to prepare, or perhaps re-configure, the normal processes of an airport terminal as a series of experiences which reflect and instigate the imagery and presence of Fiji.