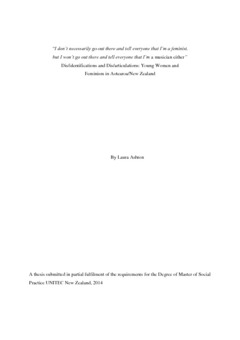 This thesis explores young women’s dis/identifications with feminism, and dis/articulations of feminism, within Aotearoa/NZ today. Grounded within a feminist poststructuralist approach, I carried out 14 semi-structured interviews with young women about their lives, feminism and postfeminism. The women were aged between 18 and 30 and came from diverse backgrounds in terms of ethnicity, sexuality and class. I then employed a discursive psychological analysis of the transcripts of the interviews. Although the majority of participants identified with feminism, feminist ideas, or explicitly as feminist on at least one occasion, for all participants these identifications were rarely straight forward. Participants drew on two key interpretive repertoires in their negotiation of feminism and the identity of feminist; firstly, an extreme-radical feminism interpretive repertoire, which was viewed negatively, and secondly, a liberal-equality feminism interpretive repertoire, which was viewed positively but simultaneously relegated feminism to history. Participants’ identifications with feminism were also mediated by their positioning on axes of privilege such as class and ethnicity, but not necessarily in straight forward ways. Furthermore, feminism was also regularly disarticulated by many of the participants through neoliberal discourses of individualism, through discourses constructing feminism as more relevant to “other”, generally Muslim, women in the world, and through a desire to distance themselves from constructions of feminism as anti-men. For the young women I interviewed, “feminism constitutes a contested and fraught territory” (Scharff, 2010, p. 831), crisscrossed with neoliberal, heteronormative and postfeminist discourses that mediate their dis/identifications with feminism and dis/articulations of feminism. Finally, I highlight how the two identified interpretive repertoires on feminism work in concert to maintain gendered power relations, before discussing some implications of the disarticulations of feminism that occurred in the present research, identifying how we might critically engage with the discourses prevalent in the disarticulations.