'Everything to everybody' : the profile and challenges of pastoral care middle leadership in New Zealand secondary schools 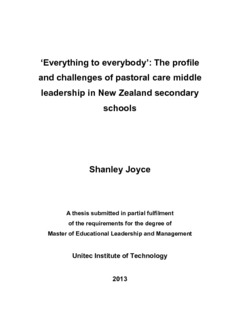 Joyce, S. (2013) 'Everything to everybody' : the profile and challenges of pastoral care middle leadership in New Zealand secondary schools. Unpublished thesis submitted in partial fulfilment of the requirements for the degree of Master of Educational Leadership and Management.