The effects of aural input enhancement on L2 acquisition 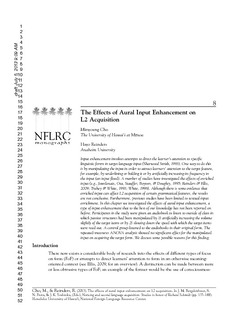 Input enhancement involves attempts to direct the learner’s attention to specific linguistic forms in target language input (Sharwood Smith, 1993). One way to do this is by manipulating the input in order to attract learners’ attention to the target feature, for example, by underlining or bolding it or by artificially increasing its frequency in the input (an input flood). A number of studies have investigated the effects of enriched input (e.g., Jourdenais, Ota, Stauffer, Boyson, & Doughty, 1995; Reinders & Ellis, 2009; Trahey & White, 1993; White, 1998). Although there is some evidence that enriched input can affect L2 acquisition of certain grammatical features, the results are not conclusive. Furthermore, previous studies have been limited to textual input enrichment. In this chapter we investigated the effects of aural input enhancement, a type of input enhancement that to the best of our knowledge has not been reported on before. Participants in the study were given an audiobook to listen to outside of class in which passive structures had been manipulated by 1) artificially increasing the volume slightly of the target items or by 2) slowing down the speed with which the target items were read out. A control group listened to the audiobooks in their original form. The repeated-measures ANOVA analysis showed no significant effect for the manipulated input on acquiring the target form. We discuss some possible reasons for this finding.