Managing affect in online supervision : the use of affective markers in written feedback 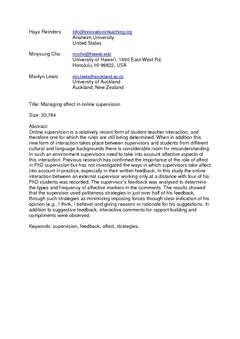 Reinders, H., Cho, Minyoung, Lewis, Marylin. (2013) Managing affect in online supervision : the use of affective markers in written feedback. New Zealand Studies in Applied Linguistics. 19 (1). Preprint. NOTE: This is research undertaken for the Anaheim University, United States prior to the author being affiliated with the Unitec Institute of Technology.

Online supervision is a relatively recent form of student-teacher interaction, and therefore one for which the rules are still being determined. When in addition this new form of interaction takes place between supervisors and students from different cultural and language backgrounds there is considerable room for misunderstanding. In such an environment supervisors need to take into account affective aspects of this interaction. Previous research has confirmed the importance of the role of affect in PhD supervision (e.g., Randall & Thornton 2001) but has not widely investigated the ways in which supervisors take affect into account in practice, especially in their written feedback. In this study the online interaction between an external supervisor working only at a distance with four of his PhD students was recorded. The supervisor’s feedback was analysed to determine the types and frequency of affective markers in the comments. The results showed that the supervisor used politeness strategies in just over half of his feedback, through such strategies as minimising imposing forces through clear indication of his opinion (e.g., I think, I believe) and giving reasons or rationale for his suggestions. In addition to suggestive feedback, interactive comments for rapport-building and compliments were observed.