Visuality after Gombrich : the innocence of the eye and modern research in the philosophy and psychology of perception 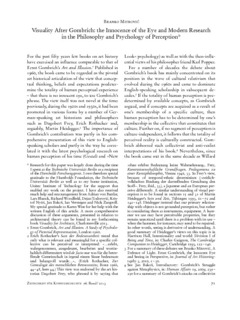 For the past fifty years few books on art history have exercised an influence comparable to that of Ernst Gombrich’s Art and Illusion. Published in 1960, the book came to be regarded as the pivotal art historical articulation of the view that conceptual thinking, beliefs and expectations predetermine the totality of human perceptual experience – that there is no innocent eye, to use Gombrich’s phrase. The view itself was not novel at the time : previously,during the 1920s and 1930s, it had been promoted in various forms by a number of German-speaking art historians and philosophers such as Dagobert Frey, Erich Rothacker and, arguably, Martin Heidegger. The importance of Gombrich’s contribution was partly in his comprehensive presentation of this view to English speaking scholars and partly in the way he correlated it with the latest psychological research on human perception of his time (Gestalt and »New Look« psychology) as well as with the then-influential views of his philosopher friend Karl Popper. For a number of decades the debate about Gombrich’s book has mainly concentrated on its position in the wave of cultural relativism that evolved during the 1960s and came to dominate English-speaking scholarship in subsequent decades. If the totality of human perception is predetermined by available concepts, as Gombrich argued, and if concepts are acquired as a result of one’s membership of a specific culture, then human perception has to be determined by one’s membership in the collective that constitutes that culture.Further on, if no segment of perception is culture-independent, it follows that the totality of perceived reality is culturally constructed. Gombrich abhorred such collectivist and anti-realist interpretations of his book.