Romantic worldview as a narcissistic construct 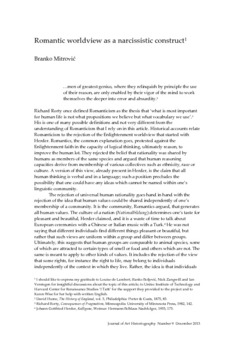 It is fair to say that it is impossible to conceive of Romanticism in independence of the thesis of that membership of a collective determines individual's reasoning capacities. Nevertheless, the definition of the Romantic worldview proposed here will be reproached for including too much that does not belong to actual historical Romanticism. It lacks historical specificity: historically, Romanticism was a particular, mainly German, cultural phenomenon at the turn of the eighteenth to the nineteenth century. Romantic worldview as defined here would include Spengler and the young Panofsky as well as even more modern articulations of the same positions. It would include, for instance, the view that dominated much of English-speaking scholarship in the final decades of the twentieth century, that culture or linguistic community slice and structure one's reality so that even the most elementary perceptions are always already predetermined by one's cultural background. The answer to this reproach is that this is precisely the wider perspective that I want to examine in this paper. My analysis pertains to such a wider picture.The phenomenon that interests me here are scholarly claims about the collective determination of individuals' reasoning capacities when such such determination (limitations) can not be proved, justified or documented.I call such positions Romantic in order to recognise their original historical articulation -but the paper analyses the general form of the argument and its conclusions are intended to have wider significance.