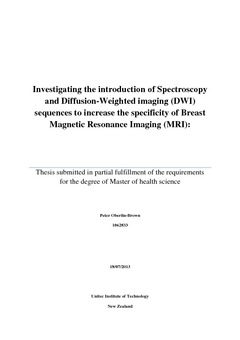 Current breast MRI practice in New Zealand closely emulates the American and European guidelines. The most commonly used protocols used for imaging breasts using these guidelines are dynamic contrast enhanced (DCE) sequences that involve the intravenous injection of contrast and generation of contrast kinetic graphs to differentiate any suspicious lesions. Breast MRI has been widely researched and is described as having high sensitivity to breast lesions. Specificity of breast MRI (DCE) is more debatable with wider variations reported resulting in false positives. This research has set out to examine the introduction of DWI and spectroscopy to routine protocols in order to evaluate their effect on sensitivity and specificity. This research was undertaken on a 1.5 Tesla MRI scanner using only pathology confirmed lesions. This selection of lesions included a wide range of all of the commonly presenting malignant lesions (Lobular, Invasive ductal, DCIS and Mucinous). In order to fully evaluate the performance of DWI and spectroscopy an audit of 68 pathology confirmed breast lesions was undertaken. DCE MRI gave sensitivity and specificity of 90% and 62.5% respectively. When evaluating the same sample with DWI, specificity was increased to 88%. Perhaps the most significant finding of this research was 100% sensitivity to DCIS (n=11) when using DWI alone. Spectroscopy was undertaken using a smaller sample of mass-like lesions (n=21) achieving sensitivity of 100%. Positive predictive value for this sample was 90%. In drawing conclusions from this research DWI using a b-value pairing of 0 and 750 mm2/s increases the specificity of breast MRI to malignancy in a clinically manageable time of less than four minutes and as such would be a worthy addition to routine breast MRI protocols. Spectroscopy demonstrated both high sensitivity and PPV to breast lesions but with a specificity of 66% and imaging times of between five and eight minutes needs further evaluation before being undertaken routinely.