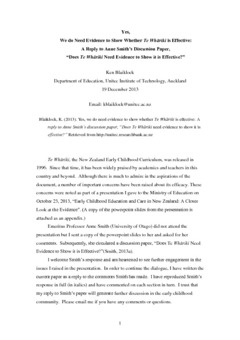 Te Whāriki, the New Zealand Early Childhood Curriculum, was released in 1996. Since that time, it has been widely praised by academics and teachers in this country and beyond. Although there is much to admire in the aspirations of the document, a number of important concerns have been raised about its efficacy. These concerns were noted as part of a presentation I gave to the Ministry of Education on October 23, 2013, “Early Childhood Education and Care in New Zealand: A Closer Look at the Evidence”. (A copy of the powerpoint slides from the presentation is attached as an appendix.)