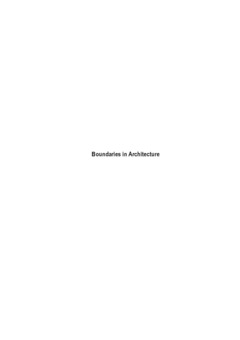 Chalmers, J. (2013). Boundaries in architecture. (Unpublished document submitted in partial fulfilment of the requirements for the degree of Master of Architecture (Professional)). Unitec Institute of Technology, Auckland, New Zealand. Retrieved from https://hdl.handle.net/10652/2341

This research project sets out to establish interpretations of the architectural boundary and addresses a focal point of the Berlin Wall, Checkpoint Charlie. The architectural boundary is considered a term implying division, separation or limits to space, yet it is also used to imply notions of spatial perception. There is a debate in Berlin about the problem of commemorating the re-unification of Germany. To understand and to participate in this debate it was necessary to review what happened in Germany as World War II ended and through the years leading up to re-unification in 1989. Another part of the literature review associated with this project addressed memorials. A memorial serves as a focus for commemoration and acknowledgment, usually of an event or of a person who has died. Typical forms of memorials include days in the calendar, sculpture, architecture, and commemorative naming, however, it was a precondition that this dissertation project must result in a design for a piece of architecture. Some people have questioned the need for a reunification memorial and whether the idea of a memorial is more effective as a perpetual debating point. Speaking of the fascist era and its victims, James Young states:- “Though some, like the Greens, might see such absorption in the process of memorial building as an evasion of memory, it may also be true that the surest engagement with memory lies in its perpetual irresolution. In fact, the best German memorial… may not be a single memorial at all-but simply the never–to–be resolved debate over which kind of memory to preserve, how to do it, in whose name, and to what end.” Design concept stage one was an investigation of the boundary using massing models which explored ideas such as symbolism and boundary, unity, memory, shadow architecture and context. This, together with the investigation of memorials, facilitated a summary of final design criteria, Design concept stage two, based on the final design criteria addressed the form, spatial arrangements and column configurations of a proposed design. The final design emphasises the horizontal plane by elevating it as a symbolic form of the Berlin Wall and metaphorical architectural boundary. The proposed design is functioning architecture dedicated to commemorating the reunification of Germany, it is not a conventional memorial. It includes exhibition space and recreation space, is a public amenity for locals and a focal point for tourists wishing to visit the former site of Checkpoint Charlie and the Berlin Wall. The shadow architecture of the site, surrounding architectural boundary and the scars of history are emphasized and the Berlin city ground plan, directives and context have been challenged. An interim building design proposal is illustrated through program and structure diagrams, conceptual plans and perspectives.