The role of cultural values on the perception of advertising as offensive : a case study of Chinese tertiary students in Auckland 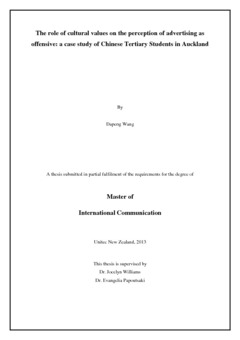 Wang, D. (2013). The role of cultural values on the perception of advertising as offensive : a case study of Chinese tertiary students in Auckland. (Unpublished document submitted in partial fulfilment of the requirements for the degree of Master of International Communication). Unitec Institute of Technology, Auckland, New Zealand. Retrieved from https://hdl.handle.net/10652/2335

This case study examines the influence of culture values on the perception of offensive advertising among Chinese tertiary students in Auckland. Previous studies examining advertising that can potentially offend have primarily centred on four basic aspects – the products being advertised, the creative execution used, the medium within which an advertisement is displayed and the audiences that are least and most likely to be offended. However, limited research has been conducted to address the influence of cultural aspects on the perception of offensive advertising.The study uses a mixed research methodology by employing research methods from both the qualitative and quantitative paradigms. Survey questionnaire and focus group interviews were developed for this project. A survey was conducted initially among Chinese tertiary students at an Institute of Technology and a University in Auckland and some of these survey participants were invited to participate in a follow-up focus group interview after the questionnaire research was completed. The questionnaire survey enabled me, the researcher, to identify a possible trend about the phenomenon of perceived offence, and based on the survey findings, this phenomenon was further investigated by focus group interviews.The findings reveal that the cultural value of Confucianism can potentially impact the perception of offensive advertising among Chinese tertiary students in Auckland. The Confucianism characteristics of Virtue, Ritual, Harmony, Filial Piety and Learning all take a part as contributing factors in the perception of offensive advertising among the participants. However, findings of the focus groups indicate that the influence of these characteristics in the perception of advertising is not apparent when participants are presented with the actual New Zealand TV advertisements. In general, Chinese tertiary students appear to have a high degree of acceptance toward New Zealand advertisements, and are unlikely to be offended by the advertisements which are targeted to the general public in New Zealand.