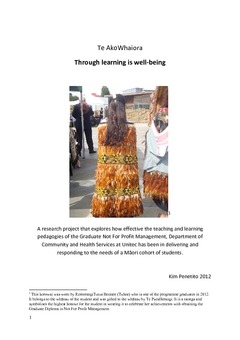 Penetito, K. H. (2012). Te Ako Whaiora - Through Learning is Wellbeing. A research project that explores how effective the teaching and learning pedagogies of the Graduate Diploma in Not For Profit Management, Department of Community and Health Services at Unitec has been delivering and responding to the needs of a Maori cohort of students. Retrievable from http://unitec.ac.nz/epress

In 2009 Unitec and Te Rau Matatini entered into a partnership agreement to deliver the GDNFPM to scholarship recipients from the Māori Mental Health sector (as a separate stream from the generic course intake). Te Rau Matatini scholarship criteria are that the recipient is Māori and is actively employed in the sector. Te Rau Matatini sought out Unitec as the preferred provider to work with these emerging leaders within the Māori Mental Health sector. Te Rau Matatini liked the content and its value, and they had received positive feedback about the teaching style (thought to be suitable for Māori learners). The agreement specified a 3 year period (2009‐2012) to appoint a Māori tutor, increase the Māori content and literature of the course and increase the number of Māori teaching staff to assist with the programme being revamped to create a best fit for the Māori learner. The majority of students who were enrolled in the cohort that became known as Te Rau Matatini were in fact bursars of Te Rau Matatini funding, however some had not been eligible for the Te Rau Matatini criteria but were Māori and managed to gain District Health Board scholarships to enable them to participate. This challenge was taken on by Unitec and with the appointment of a Māori tutor in the second year of this agreement it was essential that the GDNFPM initiate a way of examining their performance and how effective this had been at the end of this period. GDNFPM staff supported a proposal to review the delivery to this cohort by interviewing students, Te Rau Matatini, employees of the participating students and themselves as the tutors. 2011 was the last year of Te Rau Matatini sponsored students on the GDNFPM.Te Rau Matatini were consulted on a research funding proposal outlining the project and invited to provide their comments on the Ethics Application draft as partners, prior to an ethics application being submitted. Some verbal feedback was received and noted. The only concern that was raised by the CEO at the time was to ensure that the project was not in any way focused on critiquing any participants on the programme who were Mental Health consumers. In August 2011Te AkoWhaiora (the name given to the research) was approved by the Unitec Research Ethics Committee.