Ecology via architecture : an answer to our future cities 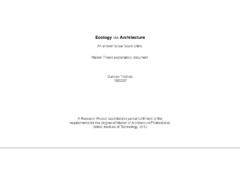 Thomas, D. (2012). Ecology via architecture : an answer to our future cities. (Unpublished document submitted in partial fulfilment of the requirements for the degree of Master of Architecture (Professional)). Unitec Institute of Technology, Auckland, New Zealand. Retrieved from https://hdl.handle.net/10652/2294

This thesis project is an architectural response to constructing a more ecologically achievable way of living in our growing urban environments. Global issues such as climate and economic changes and unsustainable resources usage are becoming more a part in todays society. These issues are only going to intensify over the coming years. Society must act now in and response to this. We as architects should become more aware of what is around the corner... The problem with modern urban dwelling, I believe, is the lack of green space (both public and private), which makes the urban centre lose its sense of community and social awareness. To combat this, I propose creating a sustainable hub within the heart of Auckland on the western fringe of the Central Business District (CBD). This will create a greater sense of community for the urban city users. .. The site is situated on the western edge of Auckland CBD, in the newly zoned Victoria Quarter block. Currently the site houses the old Auckland City Council’s Works Depot as well as a large number of rental car parks. The Works Depot sheds were designed and built by Ewen Wainscott and opened in 1968.