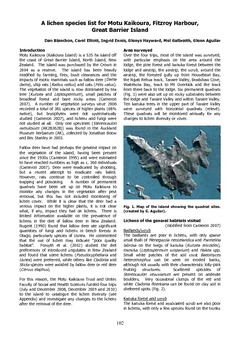 Motu Kaikoura (Kaikoura Island) is a 535 ha island off the coast of Great Barrier Island, North Island, NewZealand. The island was purchased by the Crown in 2004 as a reserve. The island has been heavily modified by farming, fires, bush clearances and the impacts of exotic mammals such as fallow deer (Dama dama), ship rats (Rattus rattus) and cats (Felis catus). The vegetation of the island is now dominated by tea tree (Kunzea and Leptospermum), small patches of broadleaf forest and bare rocky areas (Cameron 2007). A number of vegetation surveys since 2006 recorded a total of 381 species of higher plants (68% native), but bryophytes were not systematically studied (Cameron 2007), and lichens and fungi were not studied at all. Only one specimen (Stereocaulon ramulosum (AK283628)) was found in the Auckland Museum herbarium (AK), collected by Jonathan Boow and Bec Stanley in 2003.