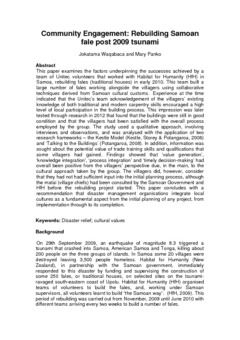 This paper examines the factors underpinning the successes achieved by a team of Unitec volunteers that worked with Habitat for Humanity (HfH) in Samoa, rebuilding fales (traditional houses) in early 2010. This team built a large number of fales working alongside the villagers using collaborative techniques derived from Samoan cultural customs. Experience at the time indicated that the Unitec’s team acknowledgement of the villagers’ existing knowledge of both traditional and modern carpentry skills encouraged a high level of local participation in the building process. This impression was later tested through research in 2012 that found that the buildings were still in good condition and that the villagers had been satisfied with the overall process employed by the group. The study used a qualitative approach, involving interviews and observations, and was analysed with the application of two research frameworks – the Kestle Model (Kestle, Storey & Potangaroa, 2008) and ‘Talking to the Buildings’ (Potangaroa, 2008). In addition, information was sought about the potential value of trade training skills and qualifications that some villagers had gained. Findings showed that ‘value generation’, ‘knowledge integration’, ‘process integration’ and ‘timely decision-making’ had overall been positive from the villagers’ perspective due, in the main, to the cultural approach taken by the group. The villagers did, however, consider that they had not had sufficient input into the initial planning process, although the matai (village chiefs) had been consulted by the Samoan Government and HfH before the rebuilding project started. This paper concludes with a recommendation that disaster management organisations integrate local cultures as a fundamental aspect from the initial planning of any project, from implementation through to its completion.