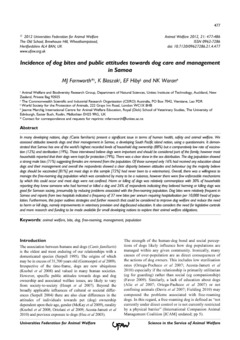 In many developing nations, dogs (Canis familiaris) present a significant issue in terms of human health, safety and animal welfare. We assessed attitudes towards dogs and their management in Samoa, a developing South Pacific island nation, using a questionnaire. It demonstrated that Samoa has one of the world’s highest recorded levels of household dog ownership (88%) but a comparatively low rate of vaccination (12%) and sterilisation (19%). Those interviewed believe dogs were important and should be considered part of the family; however most households reported that their dogs were kept for protection (79%). There was a clear skew in the sex distribution. The dog population showed a strong male bias (71%) suggesting females are removed from the population. Of those surveyed only 16% had received any education about dogs and their management and overall the respondents showed a clear disparity between attitudes and behaviour (eg the majority believe dogs should be vaccinated [81%] yet most dogs in this sample [72%] had never been to a veterinarian). Overall, there was a willingness to manage the free-roaming dog population which was considered by many to be a nuisance, however there were few enforceable mechanisms by which this could occur and most dogs were not confined. Harm or killing of dogs was relatively commonplace with 30% of households reporting they knew someone who had harmed or killed a dog and 26% of respondents indicating they believed harming or killing dogs was good for Samoan society, presumably by reducing problems associated with the free-roaming population. Dog bites were relatively frequent in Samoa and reports from two hospitals indicated a frequency of 37 new bites per annum requiring hospitalisation per 10,000 head of population. Furthermore, this paper outlines strategies and further research that could be considered to improve dog welfare and reduce the need to harm or kill dogs, namely improvements in veterinary provision and dog-focused education. It also considers the need for legislative controls and more research and funding to be made available for small developing nations to explore their animal welfare obligations.