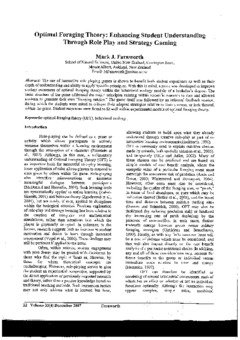 The use of interactive role playing games is shown to benefit both student experience as well as their depth of understanding and ability to apply specific principles. With this in mind, a game was developed to improve student awareness of optimal foraging theory within the behavioral ecology module of a bachelor’s degree. The basic structure of the game addressed the major principles existing within scientific research to date and allowed students to generate their own “foraging entities.” The game itself was followed by an informal feedback session, during which the students were asked to critique their adopted strategies relative to their success, or lack thereof, within the game. Student responses were found to fit well within experimental models of optimal foraging theory.