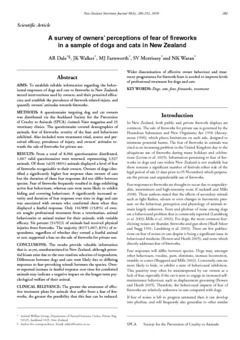 AIMS: To establish reliable information regarding the behavioural responses of dogs and cats to fi reworks in New Zealand; record interventions used by owners, and their perceived efficacies; and establish the prevalence of fi rework-related injury, and quantify owners’ attitudes towards fireworks. METHODS: A questionnaire targeting dog and cat owners was distributed via the Auckland Society for the Prevention of Cruelty to Animals (SPCA) Animals Voice magazine and 25 veterinary clinics. The questionnaire covered demographics of animals, fear of fireworks, severity of the fear, and behaviours exhibited. Also included were treatments tried, source and perceived efficacy, the prevalence of injury, and owners’ attitudes towards the sale of fireworks for private use. RESULTS: From a total of 8,966 questionnaires distributed, 1,007 valid questionnaires were returned, representing 3,527 animals. Of these 1,635 (46%) animals displayed a level of fear of fireworks recognisable to their owners. Owners of dogs identified a significantly higher fear response than owners of cats but the duration of these fear responses did not differ between species. Fear of fireworks frequently resulted in dogs exhibiting active fear behaviours, whereas cats were more likely to exhibit hiding and cowering behaviours. A significantly increased severity and duration of fear response over time in dogs and cats was associated with owners who comforted them when they displayed a fearful response. Only 141/890 (15.8%) of owners sought professional treatment from a veterinarian, animal behaviourist or animal trainer for their animals, with variable efficacy. Six percent (51/923) of animals had received physical injuries from fireworks. The majority (837/1,007; 83%) of respondents, regardless of whether they owned a fearful animal or not, supported a ban on the sale of fireworks for private use. CONCLUSIONS: The results provide valuable information that is, as yet, unsubstantiated in New Zealand, although potential biases exist due to the non-random selection of respondents. Differences between dogs and cats were likely due to differing responses to fear-provoking stimuli between the species. Owner- reported increase in fearful response over time for comforted animals may indicate a negative impact on the longer-term psychological welfare of their animal. CLINICAL RELEVANCE: The greater the awareness of effective treatment plans for animals that suffer from a fear of fireworks, the greater the possibility that this fear can be reduced Wider dissemination of effective owner behaviour and treatment programmes for firework fears is needed to improve levels of professional treatment for dogs and cats.