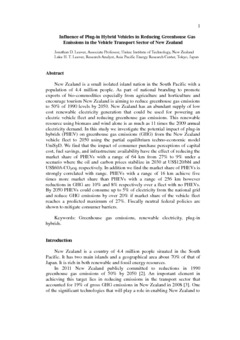 New Zealand is a small isolated island nation in the South Pacific with a population of 4.4 million people. As part of national branding to promote exports of bio-commodities especially from agriculture and horticulture and encourage tourism New Zealand is aiming to reduce greenhouse gas emissions to 50% of 1990 levels by 2050. New Zealand has an abundant supply of low cost renewable electricity generation that could be used for powering an electric vehicle fleet and reducing greenhouse gas emissions. This renewable resource using biomass and wind alone is as much as 11 times the 2009 annual electricity demand. In this study we investigate the potential impact of plug-in hybrids (PHEV) on greenhouse gas emissions (GHG) from the New Zealand vehicle fleet to 2050 using the partial equilibrium techno-economic model UniSyD. We find that the impact of consumer purchase perceptions of capital cost, fuel savings, and infrastructure availability have the effect of reducing the market share of PHEVs with a range of 64 km from 27% to 9% under a scenario where the oil and carbon prices stabilize in 2030 at US$120/bbl and US$60/t-CO2eq. respectively. In addition we find the market share of PHEVs is strongly correlated with range. PHEVs with a range of 16 km achieve five times more market share than PHEVs with a range of 256 km however reductions in GHG are 10% and 8% respectively over a fleet with no PHEVs. By 2050 PHEVs could consume up to 5% of electricity from the national grid and reduce GHG emissions by over 20% if market share of the vehicle fleet reaches a predicted maximum of 27%. Fiscally neutral federal policies are shown to mitigate consumer barriers.