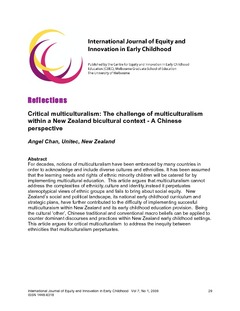 Chan, A. (2009). Critical multiculturalism: The challenge of multiculturalism within a New Zealand bicultural context - A Chinese perspective. International Journal of Equity and Innovation in Early Childhood. 7(1) : 29-40.

For decades, notions of multiculturalism have been embraced by many countries in order to acknowledge and include diverse cultures and ethnicities. It has been assumed that the learning needs and rights of ethnic minority children will be catered for by implementing multicultural education. This article argues that multiculturalism cannot address the complexities of ethnicity,culture and identity,instead it perpetuates stereoptypical views of ethnic groups and fails to bring about social equity. New Zealand’s social and political landscape, its national early childhood curriculum and strategic plans, have further contributed to the difficulty of implementing succesful multiculturaism within New Zealand and its early childhood education provision. Being the cultural ‘other’, Chinese traditional and conventional macro beliefs can be applied to counter dominant discourses and practices within New Zealand early childhood settings. This article argues for critical multiculturalism to address the inequity between ethnicities that multiculturalism perpetuates.