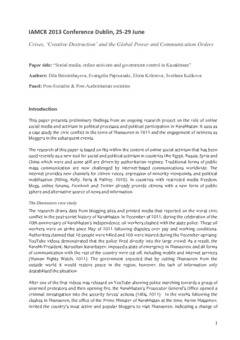 This paper presents preliminary findings from a current research project on the role of online social media and activism on political processes and political participation in Kazakhstan by using a particular case of the civic conflict in the town of Zhanaozen in December of 2011. Online social activism has been recently used as a new tool for social and political activism in countries like Egypt, Russia and China which were and some still are driven by authoritarian regimes. Traditional forms of public mass communication are now challenged by internet-based communications worldwide. The internet provides new channels for citizen voices, expression of minority viewpoints, and political mobilisation (Etling, Kelly, Faris& Palfrey, 2010). In Egypt, Russia, Syria and China, blogs, online forums, Facebook and Twitter already provide citizens with a new form of public sphere – alternative source of news and information, which are seen as a new platform for exchanging news. This research paper is drawing data from blogging sites and printed media which reported on the worst civic conflict in the post-soviet history of Kazakhstan. During the celebration of the 20th anniversary of Kazakhstan’s independence, oil workers clashed with the state police. This sparked an increased online activity of Kazakh bloggers and political activists – netizens. As a result of this engagement, the Kazakh officials took the country’s top bloggers to the town itself in the hope of getting some positive feedback online. Consequently, many of them backed the government’s assertions. This example signified both the importance of the active online Kazakh community and the government’s realisation of the importance of online engagement with its citizens. The research is looking at the role of online social media as a catalyst for political transformation in Kazakhstan and the role of the Kazakh government in controlling the political dissent using the cyberspace. The main focus of this research is blogging websites, such as LiveJournal, Facebook and Vkontakte (In Contact).The printed media which include Kazahstanskaya Pravda (Kazakhstan’s Truth) and Respublika (Republic) are used to provide a context for an analysis of the social media in Kazakhstan. A qualitative methodology has been chosen using discourse analysis and elements of framing theory as tools for analysis. Discourse analysis has been seen as the most appropriate approach with elements of the framing theory when it comes to analysing the selected networking websites and the mainstream media. Framing theory is looking at how certain information is used to make an issue for people’s knowledge and understanding, and it also influences how people see and interpret particular events. Within this study, the framing theory helps us understand the role of online social media on political processes in Kazakhstan by analysing information posted online as well as of that published in Kazakhstan’s press. The findings will contribute to a better understanding of the current political processes in Kazakhstan, and will demonstrate the relation between the increased use of online social media and the political activism in Kazakhstan. The findings of this research should provide us with a better understanding of the increased online political activity as a result of the 2011 uprisings in Zhanaozen as well as its potential of becoming a catalyst for political change in Kazakhstan.