Exploring Entrepreneurship Policy in a Pacific Context: The Case of Tonga 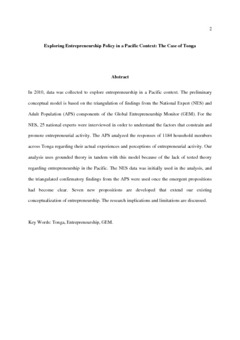 Solomona, M., and Davis, R. (2012). Exploring Entrepreneurship Policy in a Pacific Context: The Case of Tonga. International Journal of Entrepreneurship and Small Business. 16 (2) : 131-146.

In 2010, data was collected to explore entrepreneurship in a Pacific context. The preliminary conceptual model is based on the triangulation of findings from the National Expert (NES) and Adult Population (APS) components of the Global Entrepreneurship Monitor (GEM). For the NES, 25 national experts were interviewed in order to understand the factors that constrain and promote entrepreneurial activity. The APS analyzed the responses of 1184 household members across Tonga regarding their actual experiences and perceptions of entrepreneurial activity. Our analysis uses grounded theory in tandem with this model because of the lack of tested theory regarding entrepreneurship in the Pacific. The NES data was initially used in the analysis, and the triangulated confirmatory findings from the APS were used once the emergent propositions had become clear. Seven new propositions are developed that extend our existing conceptualization of entrepreneurship. The research implications and limitations are discussed.