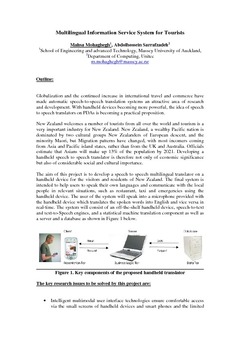 Globalization and the continued increase in international travel and commerce have made automatic speech-to-speech translation systems an attractive area of research and development. With handheld devices becoming more powerful, the idea of speech to speech translators on PDAs is becoming a practical proposition. New Zealand welcomes a number of tourists from all over the world and tourism is a very important industry for New Zealand. New Zealand, a wealthy Pacific nation is dominated by two cultural groups New Zealanders of European descent, and the minority Maori, but Migration patterns have changed, with most incomers coming from Asia and Pacific island states, rather than from the UK and Australia. Officials estimate that Asians will make up 13% of the population by 2021. Developing a handheld speech to speech translator is therefore not only of economic significance but also of considerable social and cultural importance.