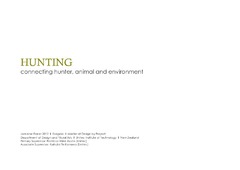 RESEARCH QUESTION: How can we illustrate the respect the modern hunter conveys for the animal and the environment through containing the meat? Connecting the hunter, the animal and the environment is the basis for this project. It investigates traditional hunter-gather cultures and their traditions of hunting as a means to reveal and support the intangible values that somehow contemporary hunters find reluctant to narrate. In particular, the research focuses on the containment and transport of meat that is obtained from the animal by the hunter. The research investigates different methods of preservation from historical and modern contexts. A variety of new materials and technologies are available some of which were investigated and others of which are difficult to access from New Zealand. The foundation for this project stems from the Māori epistemological concepts of the Te Whare Tapa Wha (four dimensions of a meeting house) model that was developed by Sir Dr. Mason Durie. With the knowledge of traditional hunting values, attitudes of modern hunters and some information from modern science a product is developed as a suggestion that meets and respects the latent values that motivate modern hunters. Foremost of these is the relation to the animal and its environment. ... Taking good care of the meat so that it does not deteriorate is important. The meat obtained by a hunter from an animal during a hunt is a symbol of this connectedness between the hunter, animal and environment. Therefore I offer the Kaihaukai Manawa as a potential idea on how one may minimise the hunter’s problem with the potential deterioration of game meat. ... This project provided the platform for me to understand what hunting meant for other hunters and what the meat represented to them. The meaning of hunting and the significance of the meat appeared not to be a common topic of discussion amongst hunters however, latent information was revealed. This information was assessed by using the TWTW model . The model helped impart and identify the essence of what hunting and the meat meant to hunters from four dimensions. The TWTW [Te Whare Tapa Wha] model also provided a holistic philosophical framework that served as a metaphoric synonym for the care of and the relationship with the animal, whanau, land and the wairuatanga (spiritual) of koha