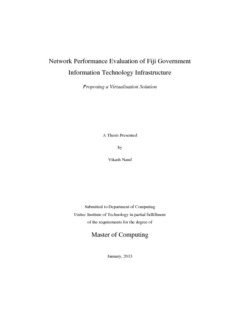 Virtualisation technology is growing fast and has now become an important part of modern computing by bringing lot of benefits for many businesses and organisation. Some of the benefits are improving resource utilisation, reducing cost, providing green IT infrastructure and easing management of computer servers. The purpose of this research is to evaluate performance of real data center non-virtualised and in this case is Fiji Government IT - ITC and compare the result with OPNET simulated virtualised data center. The D-ITG is the tool used to collect the data from ITC's network based on three operating systems; Windows Server 2008, Windows 7 and Windows Server 2003. The data collected were throughput, delay and jitter on TCP, UDP, DNS and VoIP traffic generated by D-ITG. The second set of data was collected from OPNET simulated ITC network on virtualised environment. The throughput and delay was measured and compared against the data collected from D-ITG.After the result analysis, throughput and delays obtained by OPNET simulation outperformed the result gathered on current ITC network. The throughput performance gained on virtualisation was 27% and delays were significantly low between 30ms - 60ms. It was concluded that virtualisation not only had high performance but also bring lot of benefits to Fiji Government’s IT department by making it more efficient when using latest operating systems.