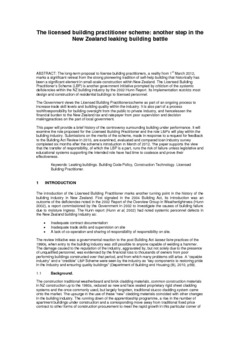 The long-term proposal to license building practitioners, a reality from 1st March 2012, marks a significant retreat from the strong pioneering tradition of self-help building that historically has been a significant element in small-scale construction within New Zealand. The Licensed Building Practitioner’s Scheme (LBP) is another government initiative prompted by criticism of the systemic deficiencies within the NZ building industry by the 2002 Hunn Report. Its implementation restricts most design and construction of residential buildings to licensed personnel. The Government views the Licensed Building Practitionersscheme as part of an ongoing process to increase trade skill levels and building quality within the industry. It is also part of a process toshiftresponsibility for building oversight from the public to private industry, and hencelessen the financial burden to the New Zealand tax and ratepayer from poor supervision and decision makingpractices on the part of local government. This paper will provide a brief history of the controversy surrounding building under performance. It will examine the role proposed for the Licensed Building Practitioner and the role LBP’s will play within the building industry. Submissions on the merits of the scheme, made in response to a request for feedback to the Building Act Review in 2010, are examined, evaluated and compared toan industry survey completed six months after the scheme’s introduction in March of 2012. The paper supports the view that the transfer of responsibility, of which the LBP is a part, runs the risk of failure unless legislative and educational systems supporting the intended role have had time to coalesce and prove their effectiveness