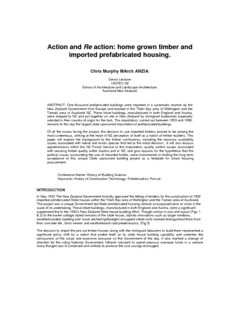 One thousand prefabricated buildings were imported in a systematic manner by the New Zealand Government from Europe and erected in the Titahi Bay area of Wellington and the Tamaki area of Auckland NZ. These kitset buildings, manufactured in both England and Austria, were shipped to NZ and put together on site in New Zealand by immigrant tradesmen especially selected in their country of origin for the task. The importation, carried out between 1953 and 1956, remains to this day the largest state sponsored importation of prefabricated buildings. Of all the issues facing the project, the decision to use imported timbers proved to be among the most contentious, striking at the heart of NZ perception of itself as a nation of timber builders. This paper will explore the background to the timber controversy, including the resource availability issues associated with native and exotic species that led to the initial decision. It will also discuss apprehensions within the NZ Forest Service to the importation, quality control issues associated with securing timber quality within Austria and in NZ, and give reasons for the hypothesis that the political issues surrounding the use of imported timber, were instrumental in limiting the long term acceptance of this unique State sponsored building project as a template for future housing procurement.