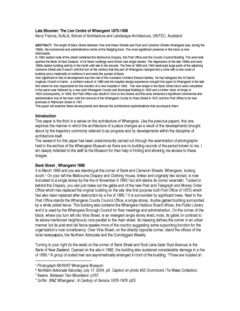 The length of Bank Street between Vine and Water Streets and Rust and Cameron Streets Whangarei was, during the 1890s, the commercial and administrative centre of the fledgling town. The most significant presence in this block is now McDonalds. In 1885 eastern side of the street contained the Melbourne Drapery, the Post Office and the County Council Building. The west side sported the Bank of New Zealand. All of these buildings were timber and single storied. The depression of the late 1880s and early 1890s stalled building activity in the North until late in the decade. The fires of 1899 and 1900 destroyed large parts of the adjoining Cameron Street and it wasn’t until the turn of the century that this part of Whangarei changed into a zone with a new scale of building and a materiality to reinforce it and resist the spread of flame. Also significant in this re development was the role of the Auckland Architect Edward Bartley. He had designed the All Saints Anglican Church in Kamo , a northern suburb in 1886 and his hospital design experience brought him again to Whangarei in the late 90s where he was responsible for the erection of a new hospital in 1900. Two new shops in the Bank Street block were completed in the same year followed by a new joint Whangarei County and Municipal Building in 1902 and a further block of shops in 1905.Subsequently, in 1908, the Post Office was rebuilt in brick to two stories and this area remained a significant commercial and administrative hub of the town until the removal of the Whangarei County to Rose Street in 1937 and the Post Office to its new premises in Rathbone Street in 1967. This paper will examine these developments and discuss the architectural sophistications that accompany them.