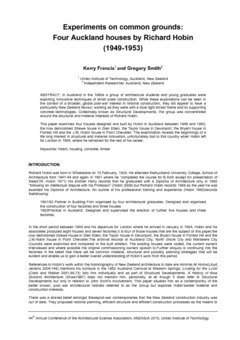 In Auckland in the 1950s a group of architecture students and young graduates were exploring innovative techniques of small scale construction. While these explorations can be seen in the context of a broader, global post-war interest in rational construction, they did appear to have a particularly New Zealand flavour; working as they were with a local light timber frame and its supporting concrete technologies. Collectively known as Structural Developments, this group was concentrated around the structural and material interests of Richard Hobin. This paper examines four houses designed and built by Hobin in Auckland between 1949 and 1953; the now demolished Strewe house in Glen Eden, the Taylor house in Devonport, the Bryant house in Forrest Hill and the J.M. Hobin house in Point Chevalier. The examination reveals the beginnings of a life long interest in structural and material innovation, unfortunately lost to this country when Hobin left for London in 1954, where he remained for the rest of his career.