Learning about Landscape Odo Strewe and the Group 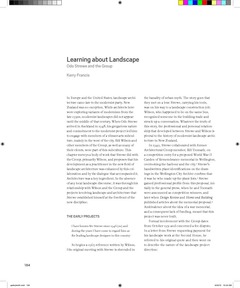 In Europe and the United States, landscape architecture came late to the modernist party. New Zealand was no exception. While architects here were exploring variants of modernism from the late 1930s, modernist landscapes did not appear until the middle of that century. When Odo Strewe arrived in Auckland in 1948, his gregarious nature and commitment to the modernist project led him to engage with members of a vibrant arts subculture, mainly in the west of the city. Bill Wilson and other members of the Group, as well as many of their clients, were part of this subculture. This chapter surveys a body of work that Strewe did with the Group, primarily Wilson, and proposes that his development as a practitioner in the new field of landscape architecture was enhanced by this collaboration and by the dialogue that accompanied it. Architecture was a key ingredient. In the absence of any local landscape discourse, it was through his relationship with Wilson and the Group and the projects involving landscape and architecture that Strewe established himself at the forefront of the new discipline.