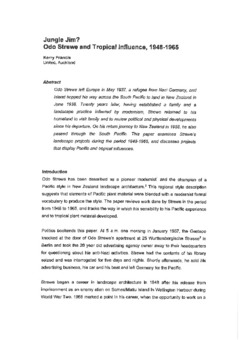 Odo Strewe left Europe in May 1937, a refugee from Nazi Germany, and island hopped his way across the South Pacific to land in New Zealand in June 1938. Twenty years later, having established a family and a landscape practice inflected by modernism, Strewe returned to his homeland to visit family and to review political and physical developments since his departure. On his return journey to New Zealand in 1958, he also passed through the South Pacific. This paper examines Strewe's landscape during the period 1948-1965, and discusses projects that display Pacific and tropical influences.